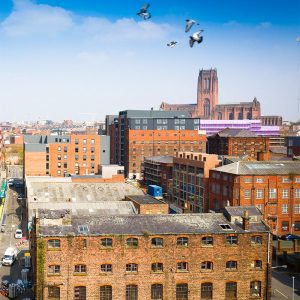 A Nursery in The Baltic Triangle Liverpool

You will find our nursery located in the heart of the Baltic Triangle in Liverpool.

We chose these premises as they provide an unrivalled environment for a nursery in terms of location, facilities and history. We outline all these below.

Also, The Childcare Academy is adjacent to tpm, our apprentice training centre. In this way, we have a flourishing synergy between the two organisations.  tpm trains childcare apprentices to the highest industry standards, giving them the unrivalled professional skills to work at The Childcare Academy, and at other nurseries across the region.

First and foremost, we chose our premises because of their physical location. Siting the nursery in The Baltic Triangle Liverpool, at The Queens Business Centre, secured the following benefits:

The central location allows us to serve families living and working in the city centre and the immediate surrounding Baltic Triangle. Furthermore, we have clients who commute to the Knowledge Quarter and the Liverpool City Enterprise Zone, and find our location ideally situated. Beyond the obvious business case; there is most definitely a community and social need for a nursery in the Baltic Triangle Liverpool. We are pleased to be filling this gap.

State of the Art Facilities

The historic Shipwright’s building houses our state of the art childcare setting. We occupy 3,000 square feet across the ground floor, including

We are proud that our premises are a legacy of Liverpool’s world-class maritime heritage and we want to share this with our children. For this reason, we gave the nursery a maritime theme.

The Baltic Triangle is a historic industrial area of Liverpool with a rich past, claiming its name from sea trade links with the Baltic countries. Despite heavy bombing during World War Two, the area boasts many listed buildings. However, the location was gradually abandoned as Liverpool’s docks declined.

When the trade coming through Liverpool’s docks declined, many of the listed buildings lay abandoned. However, by the early 2000s, entertainment and arts venues took root. Ten years later, that had evolved into an emerging thriving digital and creative quarter. The vibrant, fast-growing area is now home to many cultural and creative businesses, therefore known as Liverpool’s ‘Creative and Digital Quarter.’

The Childcare Academy is the first nursery serving this rapidly growing hub, sitting at the southern point of the city of Liverpool.